Sea Miner: Major E.B. Hunt's Civil War Rocket Torpedo, 1862-1863 is the story of the little-known development of a torpedo during the Civil War. Author Chuck Veit's research on this topic was inspired by the mention of a mysterious wooden box that was on Brooklyn's Naval Yard in the early days of the Civil War. His research reveals that the box contained a prototype of a rocket that had incredible range. However, its top-secret nature has prevented it from becoming more widely known, and likely prevented it from being completed after its inventor, E.B. Hunt, was killed in an accident. 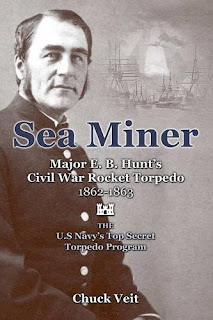 Although I enjoy reading history, this was a narrower subject than I usually select. However, I found the writing to be very good, and the many images and drawings to be helpful in describing and showing how the rockets and torpedoes of the time were constructed. The book is heavily researched with lots of footnotes, an index, a bibliography of E.B. Hunt's scientific publications, and bibliographies of primary, secondary, and picture resources. Anyone interested in Civil War or military history will find this book interesting.

Chuck Veit's research specialty is naval, nautical, and Civil War history. His day job is as a graphic designer, which explains the high quality of this self-published book. Sea Miner was published through lulu.com, which allows authors to "create, publish, and sell your books for free." Sea Miner doesn't have the appearance of a self-published book; rather, it looks very much like a scholarly monograph published by a University Press. More about Chuck Veit's other books can be found here.